For a man who was a hit in the 1980s, Ronald Reagan has done a pretty decent job of retaining his popularity. Many millennials today would not recognize celebrities from that era, but the 40th US president's name keeping popping up every now and then and pretty much everyone knows him.

President Donald Trump even recently likened himself to the 1990-89 US president while responding to claims that his mental soundness is questionable! He may have been battered for his forgetfulness, but no one forgets Reagan's famous quotes that fit perfectly as a response to many situations today. Reagan often dropped glorious off the cuff remarks that made him a quote darling. With a good dose of humor too! No matter what discussion you are in - political, social name it- there's a befitting Ronald Reagan. Add that to the man's unique voice, which we have perfected in our app, and you have the perfect comeback to most jabs that will be thrown your way. That is why we put our best effort into coming up with a Ronald Reagan voice changer in our celebrity voice app.

A Ronald Reagan impersonation ability now enables you to catch your folks and friends unawares at any time. You could pop in some humor in a tax discussion with an unexpected 'I'm from the government and I'm here to help.' Or drop the more serious 'Government's responsibility is to protect its people, not run their lives.' Or depart from all that and make Ronald Reagan say whatever you want him to say! All that fun is just a click away. It's just as easy as installing the Celebrity Voice changer, available for Android and iOS devices. The app allows you to switch to a host of other celebrity voices if you get bored by one.
Bring the fun to 2018 with the glorious Celebrity Voice Changer app! 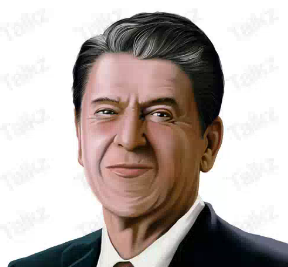