Walter White is, without doubt, one of the most legendary television star characters of our generation. He is a perfect example of people who are willing to do anything to provide for their family. Walter White managed to live two separate lives, one as the loving family man fighting cancer, and the other as a genius scientist on the wrong side of the law. Any person who has watched breaking bad will immediately recognize Walter White's voice when they hear it.

It was important to our developers to reproduce Heisenberg's voice perfectly before putting it in our Walter White voice changer app. Their hard work paid off, and now we have an app that will say anything you want in a clear Walter White impersonation at the touch of a button. There are limitless ways to have fun with the app. You can use the app to prank your friends, make adverts using the app, make videos for social media, among other fun activities.
If you've had enough of the Walter white voice, there are lots of other celebrity voice changer options to choose from. Get the app today and have fun! 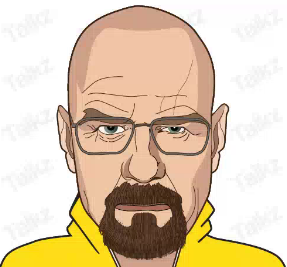