You know him as the mentor to Luke Skywalker, and a friend to Anakin Skywalker. He is a fictional character you probably know too well if you belong in the Star Wars fandom. Obi-Wan Kenobi was first introduced as the living hermit on the planet Tatooine, where he rescues the protagonist Skywalker when the latter meets an unlikely band of native Tusken Raiders. He’s the one who gave Luke the lightsaber, and encouraged him to take up Jedi training with him. Basically, he’s the first one who convinced Luke to go against Darth Vader.

He is one attractive man, and his voice sounds just as good! We know you’ll be super excited to hear yourself, do a celebrity voice changer of him! So, go ahead. Try and create your own version of his most famous lines. Whether it’s a sassy Obi-Wan impersonation of when he, Padm, and Anakin Skywalker were approached in the Execution Arena by the reek. “Just relax. Concentrate,”; or a more graceful line about power, “If you strike me down, I shall become more powerful than you can possibly imagine.”

Whatever it is you like to say, you can do so in the character of this legendary mentor! This ingenious voice changing app gives you the power to try and be Obi-Wan for days! It’s really cool, and you and your Star Wars buddies will love it for sure! Download Celebrity Voice Changer now! 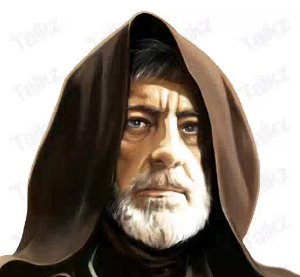